A Gaggle of Gilberto Gil 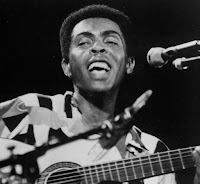 As a kid, I was always impressed by baseball players who were able to play in four different decades - even if only meant playing in the last year of a decade and then, 21 years later, in the first year of a decade.  Now that I'm in my mid-fifties, I'm also impressed by musicians with longevity, especially those with recording careers of seven decades or more.  While Gilberto Gil may not ultimately be able to match Willie Nelson's eight decades (and I can't imagine there are too many others who can match Willie), he's had a really impressive and long career.  He's also one of those artists that I became familiar with after he stopped touring regularly, so I'm disappointed that I'll probably never get to see him live; if his many live albums are any indication, he truly shines (though I'm glad I did get to see Caetano Veloso twice).  Hope everyone enjoys the two volumes and if you want to dig deeper into his music, I'd start with Gilberto Gil (1971), Expresso 2222 from 1972, and, of course a 1987 live album, Em Concerto.

Posted by Ishkabibliophile at 10:11 PM

Thanks! I guess I'm more familiar with this artist's reputation than with his work, but I appreciate your providing this introduction to his music.

Quite welcome. He and Caetano are deservedly known for their political activities (and having to leave Brazil) in the 60's, but their music still holds up really well.