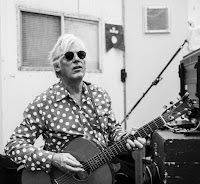 Ever since I got his 1984 release I Often Dream of Trains a couple of years back (I'm not sure why I waited so long), I've been on a Robyn Hitchcock binge.  Given how prolific (he has a new album out in April and is currently touring the northeast U.S) he's been, it's taken me a while to do justice to his catalog.   I hope the collection does justice to a legend who's remained remarkably vital for 36 years.  It's also his birthday tomorrow (March 3)!

Posted by Ishkabibliophile at 11:35 PM 9 comments: