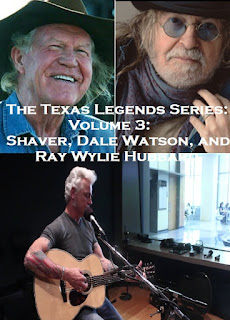 Back in 2012, I posted a compilation featuring three great Texas artists: James Hand, Justin Trevino, and Don Walser and then last year, I posted a second volume of Texas legends - The Gourds, Doug Sahm, and Spoon.  I decided not to wait another six years so here's another volume in the Texas Legend Series featuring Billy Joe Shaver, Dale Watson, and Ray Wylie Hubbard.   I won't discuss their careers except to mention that Billy Joe Shaver was supposedly the inspiration for the Jeff Bridges character in the movie Crazy Heart.  Also, I must issue a mea culpa - I haven't been keeping up with Dale Watson's recordings over the last 5-6 years, but was very pleasantly surprised (well, not really surprised) at how good his latest, Call Me Lucky, is.  Additionally, if I had to recommend just one album from each of the featured artists, I'd go with Shaver's Tramp on Your Street, Dale Watson's I Hate These Songs, and Ray Wylie Hubbard's Loco Gringo's Lament.

I've also re-upped a bunch of other Texas artists:
The Damnations' Where it Lands
The 3 named singer-songwriter compilation
The Robert Earl Keen - Lyle Lovett compilation
A Trip Back to Alternative Country - Volume 4 compilation

Posted by Ishkabibliophile at 5:09 PM 4 comments: