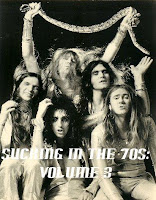 As I've mentioned when I posted my previous 70s comps (you can find Vol 1 here and Vol 2 here), I don't really believe in the notion of guilty pleasures. Still, I do feel compelled to defend my inclusion of Afternoon Delight in Volume 3. See, I still can't quite believe that a song about afternoon sex ever became a big hit. I know it was that particular moment in the 70s and it's got that weird wholesome quality, but still its ineffable weirdness always makes me oddly happy..... The other thing that fascinates me about the Starland Vocal Band is the fact that they actually got their own television variety show in 1977 - granted, it was a summer replacement series and variety shows were big at the time (Captain and Tenille got a variety show, but hey they had two hits :), but I'd really love to know the reasoning of the network exec that approved the show (and did they have to sing Afternoon Delight on every episode?). Adding to my fascination with the SVB show is that a young David Letterman was one of the writers.

You Took The Word Right Out Of My Mouth (Hot Summer Night) Meat Loaf
I Wanna Get Next To You Rose Royce
Love Will Find A Way Pablo Cruise
Funk #49 Joe Walsh
Garden Party Rick Nelson And The Stone Canyon Band
Until You Come Back To Me (That's What I'm Gonna Do) Aretha Franklin
You and Me Alice Cooper
Horse With No Name America
Fire On The Mountain Marshall Tucker Band
Dream Weaver Gary Wright
Could It Be I'm Falling In Love The Spinners
Afternoon Delight Starland Vocal Band
Drift Away Dobie Gray
Angel In Your Arms Hot
What Is Life George Harrison
Pure Love Ronnie Milsap
Sweet Emotion Aerosmith
Midnight Train to Georgia Gladys Knight & The Pips
The Most Beautiful Girl Charlie Rich
Heroes David Bowie
Posted by Ishkabibliophile at 11:29 PM 7 comments: 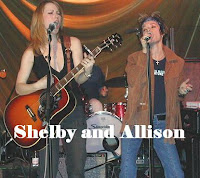 If, in the mid 90s, you had to bet on which Moorer sister (Shelby Lynne or Allison) would have made it big, who would you have bet on? I think I would have bet on Shelby since Allison's voice is a tad idiosyncratic (she does sound a bit like Cher, which is fine if you're Cher, but I think's it's a little problematic in terms of a mainstream country audience). Alas, neither has sold a lot of records, though they've both put out some dandies (The Hardest Part and The Duel for Allison and I am Shelby Lynne and Just a Little Lovin' for Shelby are my faves). They also have performed together (see the pix to the right) so here's a sisterly comp for folks to enjoy.

As promised, here's Disc Two of my Graham Parker collection.

Paralyzed
They Murdered The Clown
Maneuvers
Behind The Wall Of Sleep
Comfortably Numb
Stick To Me
No More Excuses
Little Miss Understanding
The Rest is History
Haunted Episodes
Just Like Joe Meek's Blues
2000 Funerals
Break Them Down
Passion Is No Ordinary Word
Posted by Ishkabibliophile at 11:20 PM 9 comments:

Get Started: 27 Selections from the Graham Parker Songbook (Disc One)

I may be a little addled lately (I think it's something I got on the plane last weekend sitting next to sneezing guy), but I do realize that not all of the songs on this Graham Parker collection were written by GP. But regular readers of the blog know I'm a sucker for obscurities and cuts from tribute albums, so how could I leave off Graham's cover of Richard Thompson's The Madness of Love?? Anyway, along with said obscurities, I've included one track from just about every GP studio release. (I'll post disc two next week.)

Get Started, Start A Fire
Get over It and Move On
The Madness of Love
Museum Of Stupidity
Blue Horizon
Natalie
Bring Me A Heart Again
Howlin' Wind
Devil's Sidewalk
Impenetrable
You Hit the Spot
Sounds Like Chains
I Discovered America
Posted by Ishkabibliophile at 10:10 PM 7 comments: