The Case for Calexico 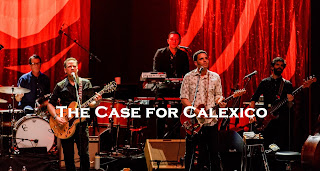 I really only got into them in the last 3-4 years, but I'm increasingly convinced that Calexico is pretty much the platonic ideal of an indie rock band.  They're musically adventurous without seeming like they're just doing it to seem adventurous, record with a lot of different folks, have great taste in covers, and, perhaps most impressively, they're still releasing really good music.  Indeed, I think their last two albums, 2015's Edge of the Sun and 2018's The Thread That Keeps Us are their two best (and definitely get the deluxe versions if you can).


While I'm sure Calexico still has a lot of great music left in them, I believe it's still high time for a two volume compilation.  Truly, there's no better musical accompaniment for a hot and humid summer afternoon than a couple of hours of Calexico.

Posted by Ishkabibliophile at 11:03 PM 2 comments: