On the Right Side of Christmas 2011

It's a little late coming (hey, I was travelling for Thanksgiving), but here's my annual Christmas music compilation (you can still download 2010 and 2009, btw).

Merry Christmas Baby Otis Redding
No More Pretty Presents Rod Piazza And The Mighty Flyers
Don't Believe In Christmas The Sonics
Come All Ye Faithful Surfer Girls The Chevelles
Rudolph The Manic Reindeer Los Lobos
Xmas Curtain My Morning Jacket
Maybe this Christmas Ron Sexsmith
Old Toy Trains Roger Miller
Gonna Wrap My Heart In Ribbons Hank Thompson
The Christmas Song Jose Feliciano
Perfect Gift Natalie Hemby
Got Something for You Best Coast and Wavves
What Christmas Means To Me Stevie Wonder
Parade Of The Wooden Soldiers The Crystals
I Saw Mommy Kissing Santa Claus Eddie Dunstedter
All I Want For Christmas Is You Mandy Barnett
I Wish You A Merry Christmas Big Dee Irwin
The Holy Babe Mahalia Jackson
Blue Xmas (To Whom It May Concern) Miles Davis
Carol of the Bells The Bird and the Bee
Christmasey Brian Wilson
Christmas Means Love Sam Cooke
Christmas In Harlem (ft. CyHi Da Prynce) Kanye West
Every Day Will Be Like A Holiday The Sweet Inspirations
Posted by Ishkabibliophile at 12:29 AM 9 comments:

Mark Eitzel and George Jones: The Kings of Broken Hearts

When I saw Jim Lauderdale open up for Lucinda Williams back in 1998 (he was also singing backup vocals for Lu), he played the song King of Broken Hearts (from his very fine debut Planet of Love). I can't remember if he said it wrote it as an homage to George Jones or if he wrote it with the intention of George Jones covering it. Either way, I thought of the song when I was putting tonight's Mark Eitzel - George Jones comp. Now Mr. Eitzel may not be quite the king of broken hearts that Mr. Jones is, but I think he'd put up a pretty good fight. :) I'll post Volume two next week.

Gladys Knight and the Pips: Everybody Needs Love/ If I Was Your Woman 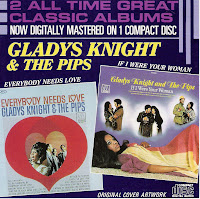 Back in 1977, Richard Pryor hosted his own comedy-variety show on NBC. It only lasted for four episodes, in large part because it was up against Happy Days (or maybe it was Laverne and Shirley). And it even if it hadn't been, it's kind of doubtful Pryor would have wanted to do it for much longer since he wasn't too crazy about NBC's censors. Anyway, on one of the shows, the skit has the Pips singing backup sans Gladys Knight - i.e., the joke is that you have this silence in between brief bits of harmonizing by the Pips. And no, the execution wasn't much funnier than it sounds. :)

I invoke this brief moment of popular culture only because I think that Gladys Knight probably would be remembered more fondly if her backing band hadn't been named the Pips. No offense to any of the Pips (who were good backup singers), but the name, well, I just think it ultimately diminished her status as a soul singer. Which is too bad, because as you can hear from the two out of print albums posted (it was a twofer cd put out by Motown in the early years of cds before they realized they could sell their old stuff as single albums), she has a darn fine emotive style.

Everybody Needs Love
I'll Be Standing By
Since I've Lost You
I Heard It Through The Grapevine
You Don't Love Me No More
Ain't No Sun Since You've Been Gone
Take Me In Your Arms And Love Me
He's My Kind Of Fellow
Yes, I'm Ready
My Bed Of Thorns
Do You Love Me Just A Little Honey
Just Walk In My Shoes
If I Were Your Woman
Feeling Alright
One Less Bell To Answer
Let It Be
I Don't Want To Do Wrong
One Step Away
Here I Am Again
How Can You Say That Ain't Love
Is There A Place (In His Heart For Me)
Everybody Is A Star
Signed Gladys
Your Love's Been Good For Me

Posted by Ishkabibliophile at 9:16 PM 2 comments: