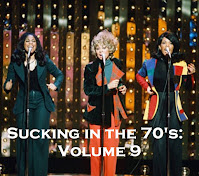 I've made a point of not repeating any artists in the Sucking in the '70s series, but this latest volume does include Valerie Carter's version of Ooh Child despite my inclusion of The Five Stairsteps much more well-known version of the song in Volume 5.  In my defense, I actually prefer Carter's version.  I know it's fairly heretical, given the popularity of The Five Stairsteps version (and I do like their version, too), but Carter really nails it and, well, it really is the sort of song an adult should be singing. :)  Anyway, I hope folks like it and I've also re-upped all the  previous volumes as well as the Saluting the 70's compilations.

Posted by Ishkabibliophile at 5:47 PM