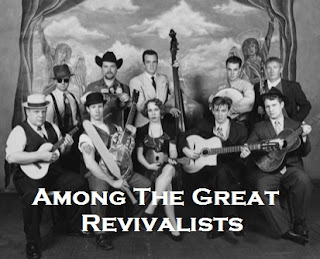 It's finally dawning on me that it's a new decade.  Consequently, I've been dwelling a bit on the idea that it's now the 2020's and that 20-30 years from now, people will almost be certainly referring to the 2020's when they talk about the "20's".  Now, I was born in the 1960s so it's not like I have any memories of living in the 1920s, but still......it just feels a little disorienting as the decade of the 1920's and the phrase "the 20's" has certain connotations for me.   Anyway, this is my very roundabout way of introducing tonight's compilation -  a collection of 90's/early 00's bands, most notably the Asylum Street Spankers, doing 20's and 30's style music.  Also, a blog reader has contributed a dandy collection of alternative country artists and bands from the 1990's.  (I've also re-upped all my 90s alternative country comps.)

Among the Great Revivalists

Posted by Ishkabibliophile at 10:39 PM

Wow - what an awesome, thoughtful comp. Thanks so much.

Quite welcome - glad you liked it.